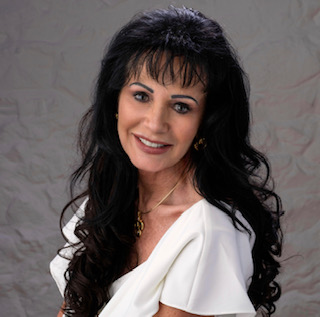 Pauline was born in Ramsgate, Kent (UK) on May 26, 1950. She attended a Church of England school and was always very interested in church prayers and its teachings.
Her first encounter with spiritualism was when she was 12, announcing to her mother that Queen Elizabeth was going to have a baby. (The very next day the newspapers officially announced it in the newspapers).

Following this experience, Pauline developed a huge interest in ‘life after death’ and gravitated towards those people who also share her ability to link with another dimension.
Pauline is now a full-time, internationally known medium. She has a spiritual centre in Hythe, Kent – The Robin and Rainbow Centre – where she runs workshops and gives demonstrations.

auline has worked for the Spiritualist Association of Great Britain (SAGB) travelling to London twice a week, where she tutors one of the mediums and runs circles and workshops as well as giving demonstrations and one to one readings. This has allowed her to meet many people of varying nationalities which Pauline views as both a welcome challenge but also an honour.

Initially, she trained as a hairdresser and then ventured into working as an assistant for the elderly and later helping children with learning difficulties. These experiences allowed her to develop compassion and humility and most importantly – the art of listening to others.
For 13 years she volunteered as a hairdresser at a local hospice which she found fulfilling both for herself and valued by the patients who were nearing the end of their Earthly life. With hindsight, Pauline now realises that this work was a great asset and a very important part of her spiritual education, for it enabled her to assist others, while both she and they were learning how to cope with imminent death.

Her parents Ron and Elsie Nayler, (both have passed) were an enormous help and support during her development. The offered support and understanding, welcoming the great gift the spirit world had blessed their daughter with. Her mother often accompanied Pauline when leading various mediumship demonstrations. Pauline says she still supports her today, through a firm connection from the spirit world.

Pauline is Clairvoyant, Clairaudient, and also Clairsentient. From a very young age, Pauline knew things intuitively and could both hear and see those wishing to communicate. Her father continues to communicate with her following his death and this Pauline finds both comforting and reassuring. The guidance he gives is loving and always helpful.

Pauline also sits to receive trance energy and has received lovely words of wisdom from the spirit world. (This work is of great interest to Pauline and she feels that the words channeled to her during these sessions are meant to be universally shared.)

In time, Pauline decided to look into developing her mediumistic gift and found her way to the Spiritualist Church in Hythe, where she was taken under the wing of Terry Tasker.
He is a very well-known UK medium who for many years worked at the (SAGB). She was invited to sit in Terry Tasker’s development Circle and also attended many workshops at Sheila Frenches’, Ersham Star Centre in Canterbury, Kent. Pauline also trained for 2 years as a spiritual healer.

Twice a year Pauline would attend weekend seminars, which used to be held in Eastbourne by the (SAGB) where she worked alongside such mediums as Gordon Smith; Billy Cook, and Mary Armor.

Pauline has worked for numerous Spiritual churches during the last l6 years and attends various ones cumulating in about 3 different churches a month. Pauline’s main work now is as an international clairvoyant medium. She has travelled throughout Great Britain, France, Spain, Germany, Vienna, San Francisco, and also South Africa.

Pauline loves to watch the faces of the recipients when demonstrating abroad for often translations have to both given and received. Watching the realisation dawn on another’s face when messages are received is quite wonderful to her. This reassures and cements the true partnership which exists between the spirit world and, via Pauline, to the one who needs the reassurance given.

Spiritualist churches are places of peace and love and offer a coming together of like-minded souls. Her audiences send love, support, and positive thoughts to Pauline, which all help with the successful communication from the spirit world. Her greatest pleasure, Pauline says, is witnessing the joy on people’s faces after they receive guidance and messages from their loved ones, which can then help them to continue their journey through life.

Pauline says her best day was giving her first message. The worst was losing her father, who passed first. However, this experience helped to turn Pauline towards developing her spirituality more deeply. Her philosophy, acknowledging the sacred gift she has, is to live life to the full and become a better person. She is willing to learn from the mistakes she has made and to improve in any way that is open to her.

Pauline finds that the special things she values are people; books; music; pets and various possessions which are of great sentimental value to her because they were gifts from her parents, and she regards them as priceless.

She enjoys hobbies the main one being rock ‘n’ roll dancing; going to the gym, and cycling also gives her joy. Pauline also has a particular interest in the Aspinall Foundation, which runs zoos, famous for reintroducing protected and rare and endangered species, to halt the extinction of rare and endangered wildlife.

If Pauline were to be allowed one wish it would be to hug her parents once more and ask them for details about the spirit world from their current perspective so that she could greater understand the spirit world.

Her second wish would be to have the opportunity to meet the great medium Gordon Higginson a former president of the Spiritualist National Union a brilliant clairvoyant and teacher, to learn about his life from child to adult.

Her third wish, last but not least, is to meet Elvis Presley and to hear him sing.

For conversion to US dollars, visit X Rates Calculator

I received an exceptional reading from Pauline Mason who was able to connect with my son and father. First, she shared several highly evidential statements that were relevant to my father, facts not publicly known. But my favorite validation came from my youngest son, Brandon when Pauline referenced the specific location of a scar he had from a cut he suffered at the age of two. That reference was so obscure, something that I hadn’t even thought about for decades, but immediately recognized. I would highly recommend Pauline Mason to anyone looking for an outstanding Psychic-Medium.

I had a fabulous reading with Pauline Mason which was arranged by Mark Ireland and conducted under the controlled conditions of his testing process for Mediums.

Pauline connected me with my daughter, parents, and even with a childhood friend who passed three years ago. Many validations were shared that left me without any doubt that our loved ones who’ve passed are still very much present in our lives.

Pauline mentioned my daughter describing a stone of hers that I had set in a pendant and wore on a gold chain. I haven’t told many people about her diamond earrings that I wore, and after losing one, I had the remaining one made into a necklace that I wear and treasure.

I know Pauline will bring much comfort to those who have a reading with her.